Until recently I'd never considered cooking baby back ribs in the air fryer.

Partially because I've always cooked ribs in a grill or smoker.

Seasoned ribs after cooking in the air fryer basket

Do you cook ribs up or down?

It really doesn't matter if you cook ribs up or down. Using an air fryer to cook ribs like we're doing here I prefer to cook with the meat side up so that it promotes even airflow around the food. Probably the best bet is to flip the ribs a couple of times during cooking.

Do I soak my ribs to make them more tender?

I've heard of people soaking a rack of ribs in apple juice or even water with brown sugar before cooking. This really won't do much to tenderize the ribs. If you are dead set on soaking ribs you could add a couple of tablespoons of salt to a gallon of water essentially brining the ribs but it's really not necessary. Some other tips on cooking pork ribs can be found in this article.

The ribs that I typically cook are on a pellet grill or Kamado grill like the Kamado Joe. I've even gone so far as to sous vide cook ribs and finish them on the Traeger but these methods take a good amount of time.

Using the 3-2-1 method of cooking ribs takes about six hours. But what if you want ribs and don't have six hours to wait? This Ninja Foodi Grill recipe for air fryer baby back ribs will have you licking barbecue sauce off of your fingers in less than an hour.

If you really fancy slow cooking, check out this article on cooking beef short ribs for 75 hours!

Applying bbq sauce toward the end of the cook

I like to think of this method of cooking ribs as a turbo method.

Air fryers like the Ninja Foodi Grill are basically turbo ovens. So it makes sense that we use one here in this recipe. 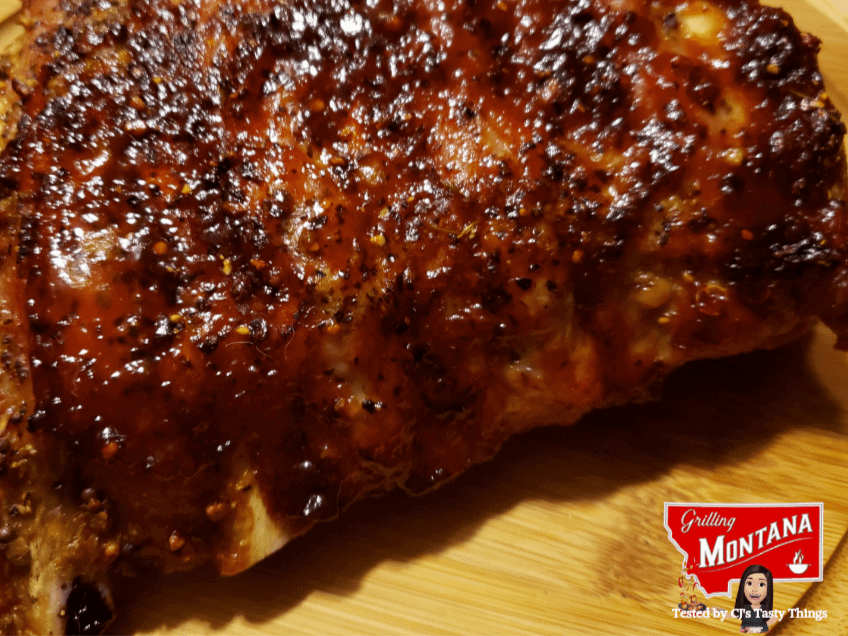 Allowing the ribs to cool a bit before slicing Make no mistake about it. This method is quick. But it's also quite effective if you want to enjoy ribs in about an hour.

These ribs will have some chew to them. They are not boiled or slow-cooked so the meat is much more firm but still flavorful and delicious.

Scroll down to get the full recipe and our method for making baby back ribs in the air fryer. This is another amazing dish that CJ of CJ's Tasty Things cooked in the Ninja Foodi Grill.

Recently CJ made a delicious meatloaf in the Ninja Foodi Grill, and it's worth taking a look at.

Like this air fryer baby back rib recipe, it's fun to learn her method of cooking in the Ninja Foodi Grill, and she's been generous enough to share it with us here.

If you want to see what else CJ has cooking, she also has a Facebook page to go with her Instagram and she frequently shares recipes and helps others in the Ninja Foodi Grill ❤️ Lovers Group.

Cj's method is so much quicker than my 75-hour sous vide short ribs. But if you're up for a longer-term project you should check this recipe out! If the membrane doesn't come off easily don't sweat it. Mine separated nicely after cooking.