If you've never heard of pork brisket you're not alone Beef brisket has always been popular. But pork brisket is relatively unheard of The word brisket evokes so much emotion.  Bring up brisket in Texas and you'll probably hear stories about how cooked brisket is as sweet as the smell of a yellow rose. Talk to a real New Yorker about brisket and hear stories of corned brisket or corned beef sandwiches prepared slow cooker style from places like Katz Delicatessen where the meat on a pastrami or braised brisket sandwich is piled higher than Marge Simpson's beehive hairdo.

But mention pork brisket to just about anyone and you get the same reaction.

Is brisket beef or pork?

The answer can be both! Both animals have a brisket but the beef brisket is much more common than the pork brisket. Beef briskets weigh often 18-20 pounds each so they serve more people making them popular with barbecue restaurants and smoke shacks The pork brisket is much smaller and less common so it's rarely on the menu at a BBQ joint. Because of its size, there's not as much emphasis on the flat cut or the point cut as with a cut of beef.

So what is pork brisket?

Pork brisket is a portion of the picnic ham. Typically, pork brisket is sold as a part of the ham but clever butchers are separating this cut of meat and selling it as a stand-alone offering. If you're familiar with cuts of the pig, the pork shoulder, aka butt, or Boston butt is often more desirable than its less popular Siamese twin, the picnic roast. Although the two are connected to each other, the Boston butt is what barbecue joints throw on the smoker for shredded and pulled pork we've come to love so much. Portions of both the pork shoulder and the picnic roast (aka uncured ham) are included in the pork brisket. This is a combination of both lean and fattier or more marbled meat.

Where can I get pork brisket?

I sourced my brisket from Porter Road. Porter Road is an online butcher shop that ships most items like the pork brisket fresh. It arrives at your doorstep icy cold and never having seen the inside of the freezer.  The Porter Road website says that:

"The Brisket is the pectoral muscle of the pig.

This muscle gets a workout because of the pasture and forest-raised lifestyle of our animals, making the cut very tough and extremely flavorful, which is why it’s perfect for slow-cooking methods like smoking.

The Pork Brisket consists of two different muscles connected with a nice strip of fat that cooks down, leaving you with an incredibly moist cut with deep flavor."

In addition to pork brisket, Porter Road is also a good source of other meats like pork belly, pork roast, pork loin. They also have many a cut of beef and I especially enjoy the meat for pot roast and other unique beef cuts like the skirt steak.

What's the difference between beef and pork brisket?

How big is a pork brisket?

The skinless one I cooked most recently weighed in at 2.75 pounds. Most of the skinless briskets range in size from 2.25 to 3.5 pounds. If you buy it with the skin on, plan on it weighing around 4 pounds.

How do you cook a pork brisket?

I reached out to Porter Road to inquire about how they recommend cooking pork brisket. The butchers said the most important thing is to respect the size of the cut of meat and make sure it doesn't dry out in the cooking process.

Roasting is recommended at a lower temperature similar to cooking any boneless pork roast. I suppose you could try this as a braised brisket, but I appreciate the smoke flavor and like to cook pork brisket Texas-style. Carving is the key

Juiciness and tenderness are two different things. Meat can be cooked perfectly and be quite juicy. But if sliced improperly there's very little you can do to make it tender.  As with so many cuts of meat, the way it's sliced is often the difference between a deliciously tender bite of food and giving your molars a major workout.  To achieve the perfect bite, meat must be sliced across the grain with a very sharp knife. Find the grain of the meat by looking for striations or parallel lines in the meat. Once you identify which way the grain runs, cut across or perpendicular to the grain.  It's so important that you use a sharp knife when slicing meat like pork brisket. Often while my meat is resting, I like to make sure my knives are ready for cutting perfect slices. One of the quickest and easiest ways to maintain a sharp blade is to run my knife through a pre-programmed sharpening cycle on the WorkSharp E5. Sometimes all your knife needs is a quick touch up, in which case I reach for the WorkSharp M3 with the ceramic rod for quick honing. 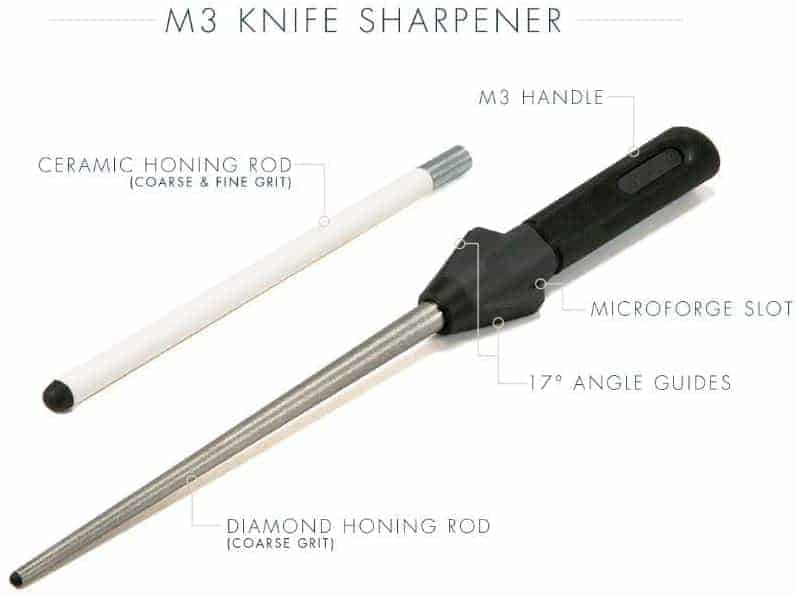 The WorkSharp M3 also is great to keep close by if you want to quickly touch up your edge in between slices. I love how the built-in angle guide helps keep my knife where it needs to be at about a 17-degree angle for optimal sharpening.  Although this dish is delicious on its own, it goes wonderfully with grilled artichoke dip and will be a crowd-pleaser the next time you're hosting friends. Paul Sidoriak
Pork brisket is something you should be cooking on your smoker but probably aren't. This dish is easy to make as the heat, smoke, and seasoning rub do the majority of the work. Your hardest decision will be how many people you invite to sample this delicious and relatively undiscovered cut of meat.
3.84 from 24 votes
Print Recipe Pin Recipe
Prep Time 1 d
Cook Time 3 hrs
Additional Time 30 mins
Total Time 1 d 3 hrs 30 mins
Course Pork
Cuisine Low Carb
Calories 247 kcal The final finish temperature of this pork brisket will be between 175-180F which is perfect for slicing. If you prefer the pork to be shredded consider wrapping the meat in foil at 160F and continue cooking until it reaches an internal temperature of 200-203F.