Blackstone Products will be offering the new E-Series electric griddle exclusively in WalMart stores, and online as part of its portable grills collection.

This is the first time we've seen a dedicated griddle enter into the outdoor electric grill category and it could be a game-changer for people who aren't allowed to have gas grills for outdoor cooking.

Blackstone's E-series griddle will be available in two sizes, 17" and 22"

Both the 17" model and the 22" unit are referred to as an Electric Tabletop Griddle with an attached griddle hood. In a departure from other Blackstone griddles, this flat top grill comes equipped with a machine-cast aluminum griddle plate. 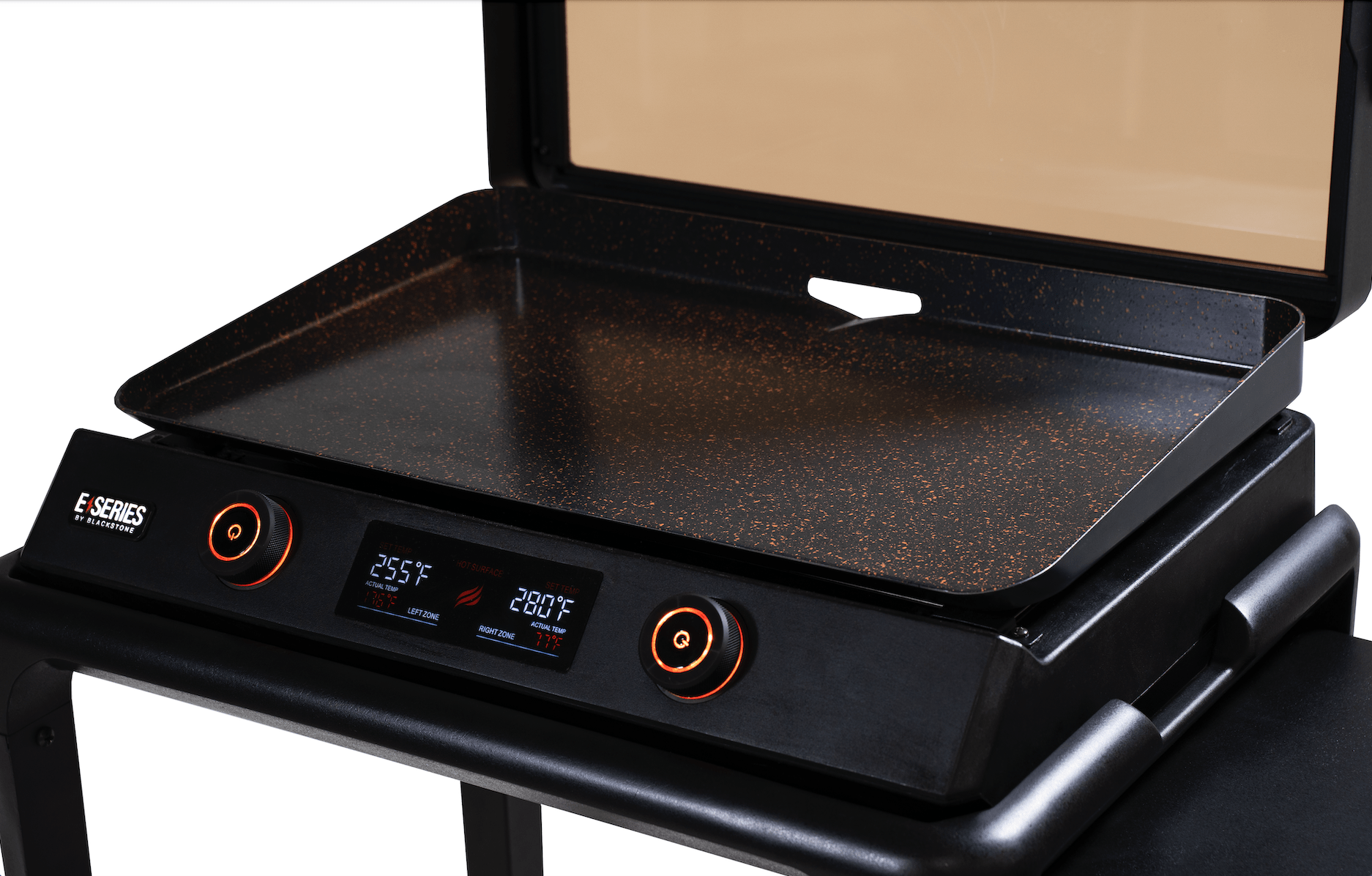 Aluminum is excellent for conduction cooking and works wonderfully for heating quickly and evenly.

Both of the Blackstone E-series offerings come with the griddle plate coated by a non-stick ceramic-titanium coating that makes an initial seasoning unnecessary. The griddle plate is very easy to clean. 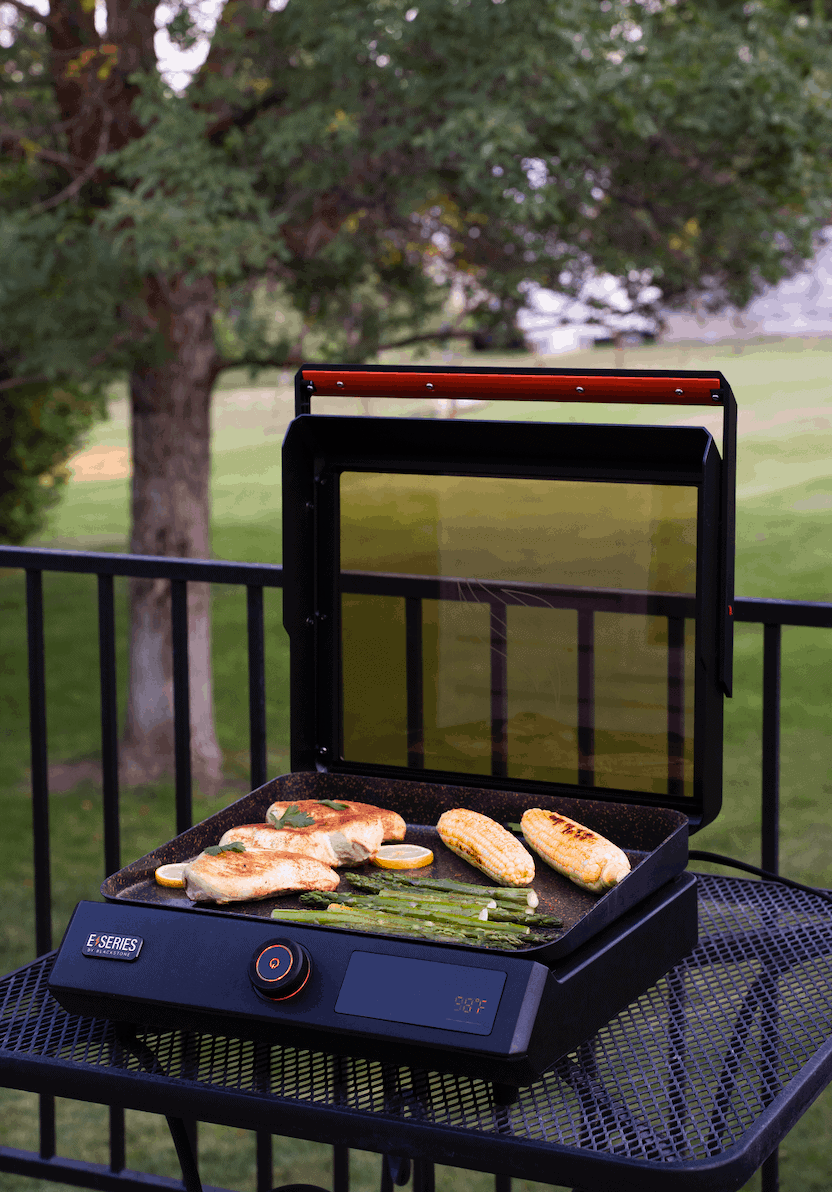 The hood's rear hinging system and wide handle allow you to easily raise and lower the hood with a single hand.

Covering foods to trap heat while cooking is common when using a griddle, so these hoods are convenient for holding in heat.

It's perfect for melting cheese over burgers or giving fickle foods like chicken cutlets an opportunity to cook more evenly, keeping them nice and juicy. I suspect the hood will make a nice splatter guard when cooking bacon or burgers indoors. Blackstone took a page from its outdoor line and included a rear grease management system in the E-series griddles. It's a bit more sleek and compact than the outdoor offerings, about the perfect size for collecting unwanted oils and liquids. The stainless steel drip tray has a hard coating and is dishwasher safe.

Both E-series griddles are equipped with a large LCD controller display allowing you to dial in your cooking temperature to a more precise degree of accuracy than ever before.

Precise temperature control allows you to make this a smokeless grill when cooking indoors. A nice feature not normally found on an electric grill. 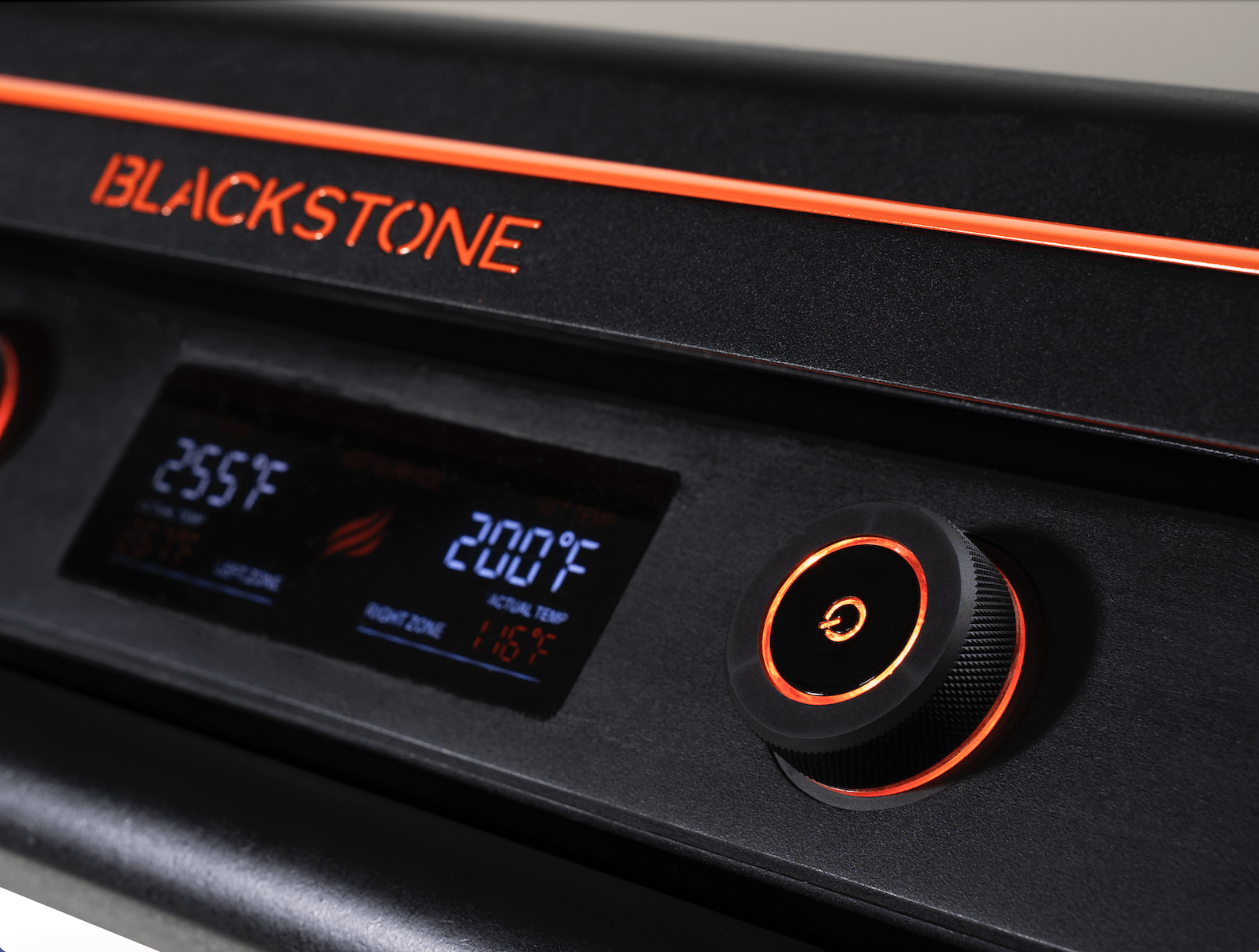 Temperature is quickly controlled by an EZ-Touch control dial. Ergonomic, the dial adjusts smoothly and feels sturdy when adjusting temperatures.

What's under the griddle hood?

Blackstone's 17" E-series unit is 14" deep, offering 234 square inches of grilling surface. Unpacked, it weighs in at just over 21 pounds. Plug the E-series griddle into any standard 120V plug and start cooking. The 17" electric griddle pulls 600W of power. Unlike gas grilling, the E-series will never run out of propane.  As long as you have access to a working power outlet the heating element will do its thing. The 22" unit is also about 14" deep with 312 square inches of cooking surface. This is a similar amount of cooking area as Blackstone's 22" gas griddle.

Unpacked, it weighs a bit more, about 28 pounds, but not to worry because it comes with a rolling cart. The cart boasts 4 independently swiveling and locking industrial-style casters.

Rolling it should be a cinch on a smooth surface.

The rolling cart also has a side shelf and some additional storage wells underneath. I suspect the dual wells will have some aftermarket accessories designed to fit the storage compartments perfectly. This unit with the cart weighs in at 51 pounds. It's hefty enough to feel sturdy but light enough that it can be lifted into the back of a pickup for an afternoon of tailgating. 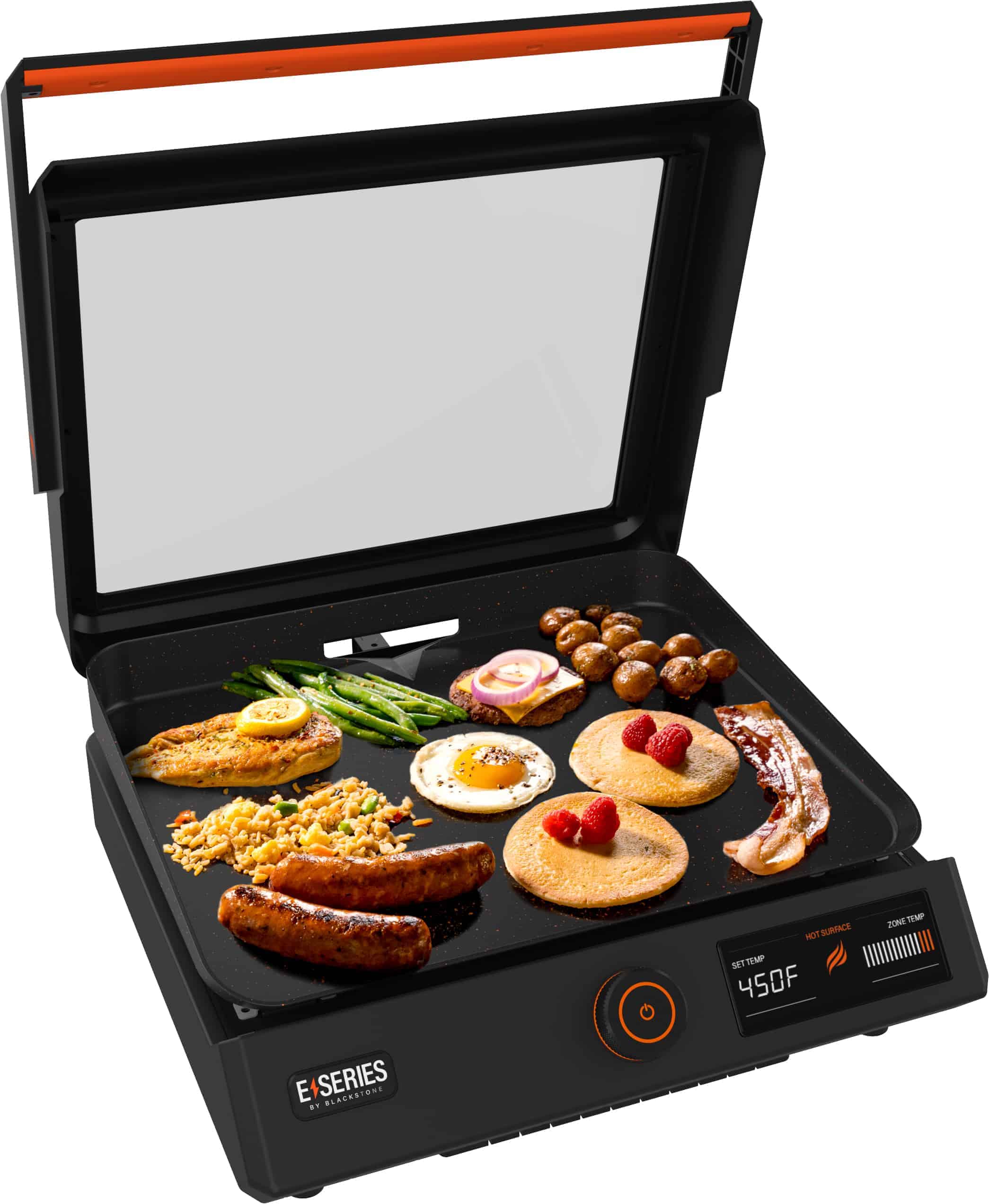 What's the benefit of the Blackstone Electric Griddle?

At this point, it probably goes without saying, but the Blackstone E-series griddles are powered by electricity.

Although they're a departure from the glow of gas-fired griddles like the AirFryer Griddle Combo, there are some benefits to saying goodbye to gas. The Blackstone E-series griddle can be used indoors

Naturally, the griddle will be a great indoor alternative to cooking outdoors, but I anticipate the electric griddle being very popular with the higher-end tent and RV camping crowd.

Nonstick cookware technology has come a long way since Teflon. Blackstone takes advantage of these non-stick modern surfaces on the E-series griddle.

Having a non-stick surface also means that no seasoning and very little maintenance is required. I suspect the griddle surface to also be dishwasher safe which could be nice for the occasional deep cleaning. 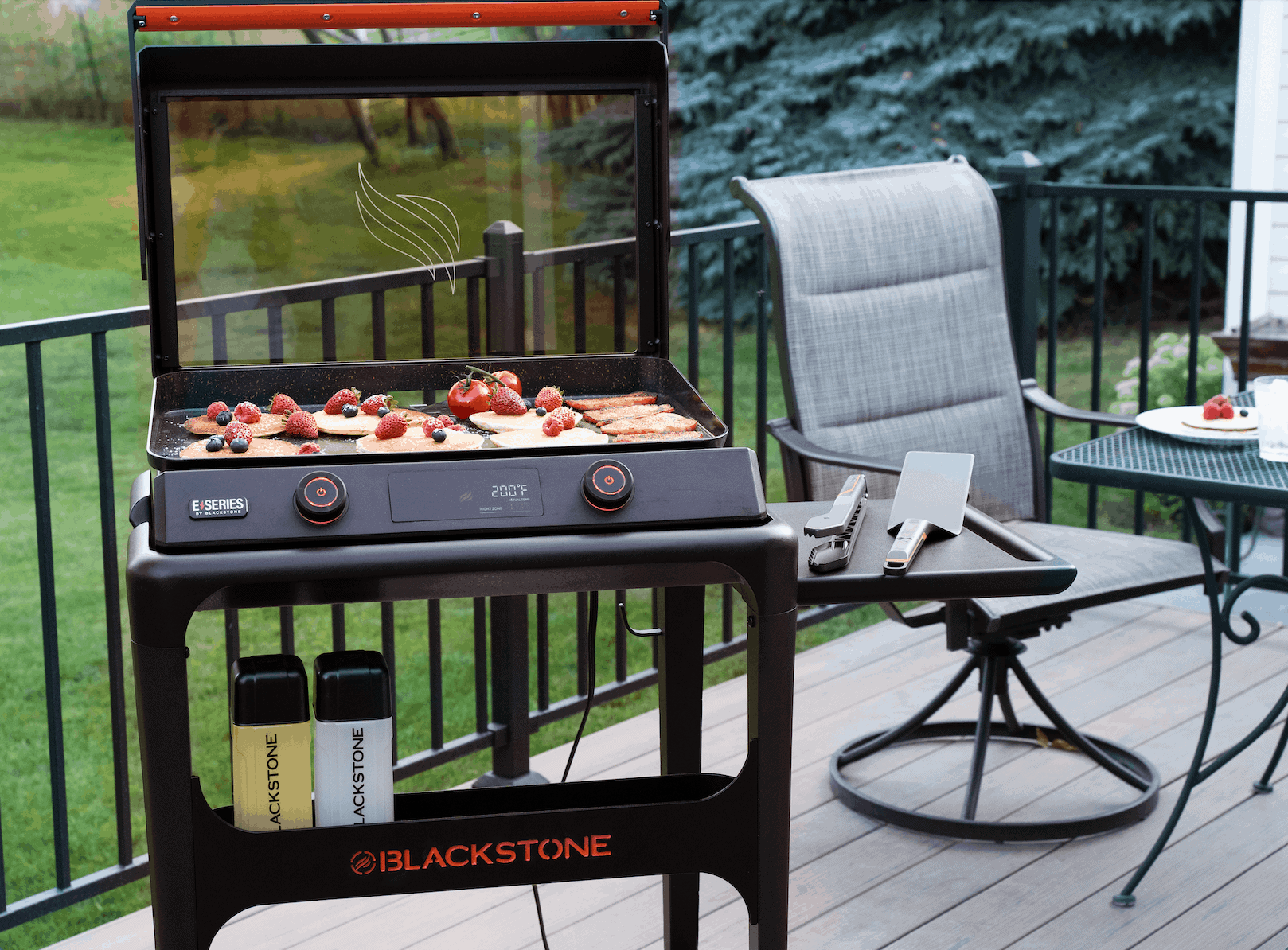 One look and you realize this is clearly not your grandmother's electric griddle.

The Blackstone E-series is a great example of how customers win when manufacturers innovate.

How Much Does This Outdoor Electric Griddle Cost?

I'd be interested to hear how you would use the new Blackstone Electric griddle. If you're looking for something larger, an outdoor griddle may be a good solution for you. Check out this look at outdoor griddles where we share our opinion on if the flat top griddle is worth it.

Please leave a comment with what you would cook first.

If you're looking for ideas of what you should be cooking next, check out my griddle cookbook with 50 recipes for your flattop griddle.