There's something amazing about grilled Carne Asada, slices of thinly sliced and marinated beef turn into delicious flavor bombs when grilled and I just can't get enough of it. There's something amazing about grilled Carne Asada, slices of thinly sliced and marinated beef turn into delicious flavor bombs when grilled and I just can't get enough of it.

I don't often plan on making Carne Asada recipes and grilled veggies for dinner.  But I do like cooking dinner on the Big Green Egg, and with a fresh bag of Jealous Devil Charcoal ready to fire up, It's off to the market to find a skirt steak for dinner.

Today, I'm in the mood for intense flavor, robust seasoning, and high heat. A hard-working muscle from the animal’s core would do the trick.  It's the perfect balance of flavors with a slightly chewy consistency.

The local, independent grocery store I prefer to shop at does not carry skirt steak, so I decided to try the nearby Safeway store (now Missoula Fresh Market).

Fortunately for me, I had no such luck. Yes, Safeway did have a wide variety of grill-ables that would have sufficed, but no skirt steak.

My fallback, Plan B was to find a nice beef tri-tip that also meets my prerequisites but it also not to be found. Going into panic mode, I rifled through the remaining packages for anything that could salvage my concept of dinner. In reality, meat is just an excuse for me to buy avocados and justify making guacamole. At this point, anything that worked well with avocado would suffice.

I find a pre-marinated beef cut labeled simply as “carne asada”.  The ingredients and seasonings sound delicious so I decide to take a chance.

What cut of meat do you use for this recipe?

The mysterious carne asada claimed to be from the sirloin flap which I had previously never heard of. If you have never heard of sirloin flap, Wikipedia tells me that it consists of the obliquus internus abdominis muscle from the bottom sirloin butt.

Two other cuts of beef to consider for this recipe would be the skirt steak or flank steak.

Both the skirt steak and flank steak are delicious when grilled to medium-rare and perfect for tacos.

My favorite trick brings extra flavor to the dish. These cuts of meat will benefit from a simple marinade.

I like to use lots of lime juice and a little oil with some garlic, salt, and black pepper and let the meat soak in the flavors for up to 24 hours before cooking.

Believe it or not, one of the simplest ways to make carne asada meat more tender is to slice the meat properly. Identifying the direction of the grain of the meat and cutting across the grain after cooking will make the meat far more tender and far less chewy. Seasoned Carne Asada from the Supermarket

When I unpacked the meat, it turned out that the carne asada I had originally thought was a roast, unraveled into large, thin slices.

The peppery seasoning looked and smelled fantastic and I let it come up to room temperature as my Big Green Egg was heating up.

Allowing your meat to come up to room temperature before grilling is a good practice when cooking hot and fast. Usually, I give it about 45 minutes to an hour sitting on the counter. That's about the amount of time it takes to get my Big Green egg fired up and heat soaked. You can learn more about what is heat soaking and why it's important for Kamado grills in this article. What to serve with this recipe

Grilled vegetables are some of my favorite things to serve alongside carne asada meat.

I like to slow roast some bell peppers and sweet onion over a raised grate on the Big Green Egg until the sweet flavors intensify. When they are about ready, finish them quickly with a charring sear for some color and additional flavor.

The Big Green Egg had stabilized at around 500 degrees and the cast-iron grate was ready for some hot and fast grilling.

Peppers and onions grilling away

For 90 seconds, I let the thin meat sizzle over the smoky lump charcoal on the Big Green Egg and then turned it 45 degrees for some dramatic grill marks.

Without flipping, let the meat cook for another 90 seconds and then put it on a nearby plate to rest.

Grilling tortillas makes them warm and delicious with an extra pop of flavor you can't get otherwise. 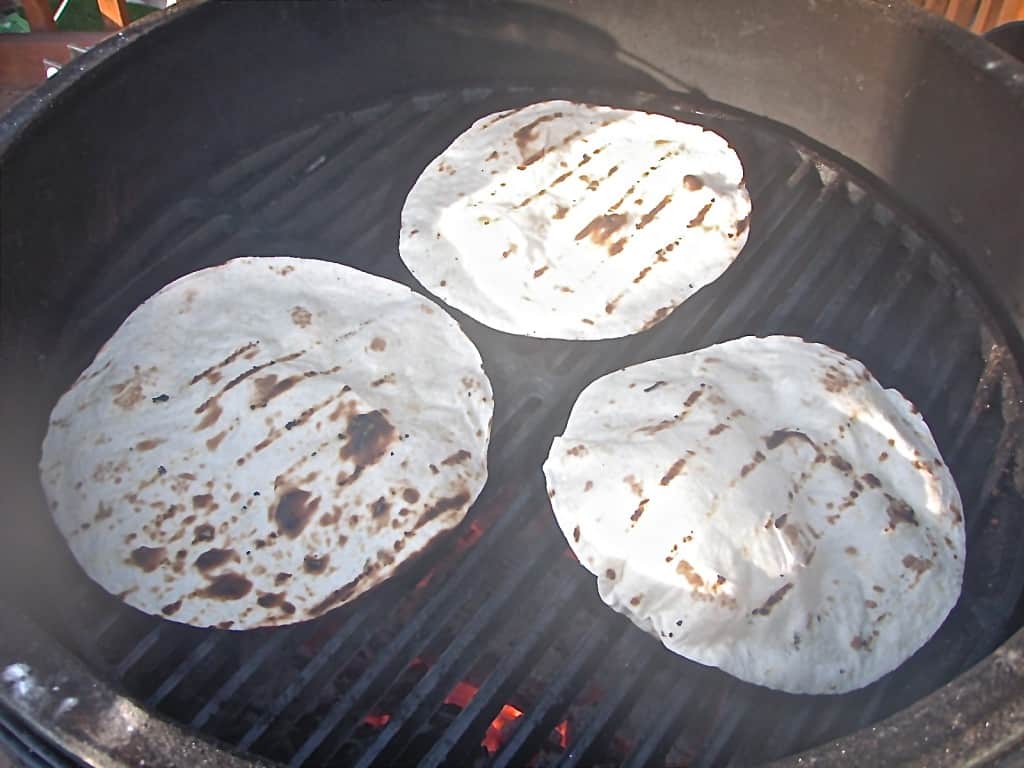 While the meat rests for about 5 minutes, I like to chop any grilled veggies into small pieces and add some diced tomato as a topping.

Just before serving, I slice the meat thinly against the grain, imagining how a street vendor would cut meat in a tropical paradise. I roll it up in the warm tortilla and we enjoy the Grilled Carne Asada with Veggies and Guacamole. 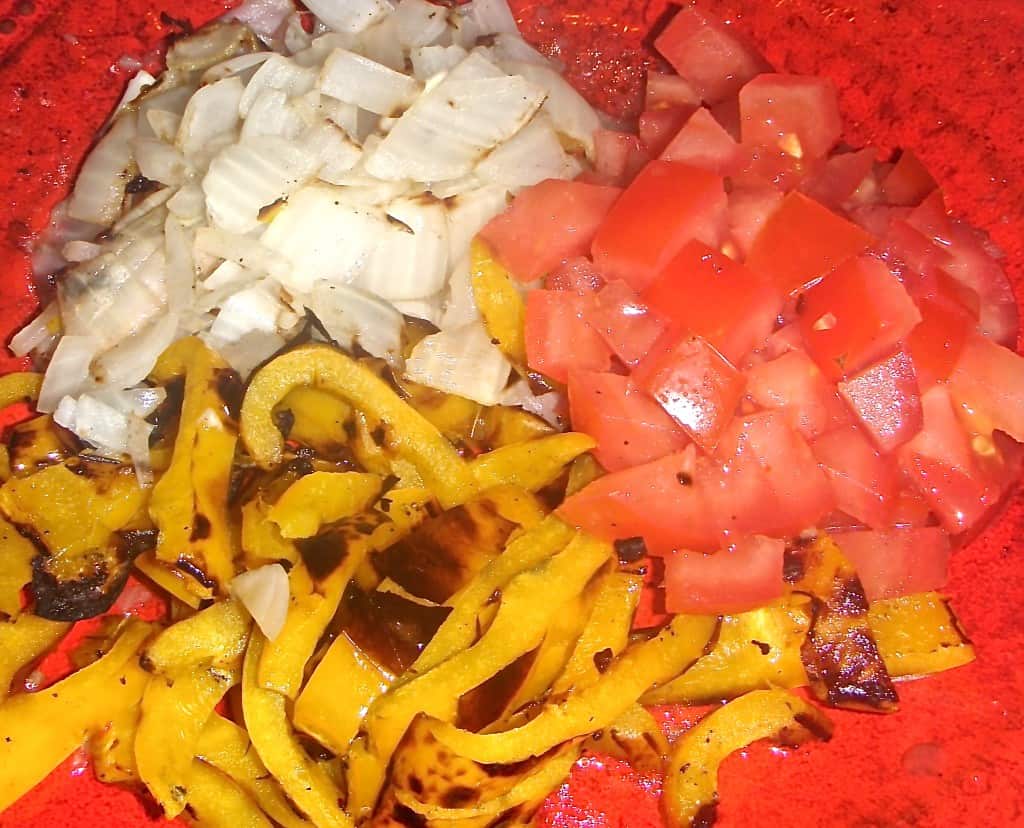 Is Carne Asada Easy to Grill?

I'm very excited about how the Grilled Carne Asada recipe and veggies turned out. But more excited about how easy it really was to make. Yes, I fussed a bit about some of the temperatures and ingredients. But it's hard not to think about how delicious this dish would be while camping, tailgating, or just picnicking in the park.

Is This Recipe Easy?

This recipe is so easy to make.

Even someone who's a novice on the grill will have no trouble with this dish. A perfect recipe to prepare on date night or even make when you have helpers with little hands around to assist.

If you love grilled meats that taste delicious wrapped in a tortilla check out this Easy Grilled Huli Huli Chicken recipe. It's simple to make and one of my favorites. 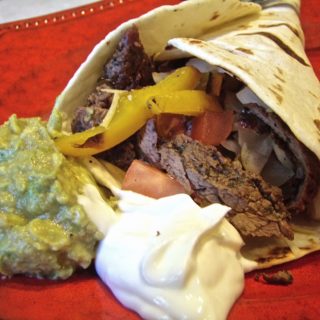