Blackstone just announced the new AirFryer Griddle Combo and I’m kind of flipping out about it.

The new Blackstone AirFryer Griddle Combo combines a four-burner 36” griddle with two gas-powered air frying drawers and a third warming drawer. This allows you to cook more foods and in different ways than ever before. Air frying, baking, and roasting are all now on the menu and will be a game-changer for outdoor griddle cooks. The air fryer drawers are heated by a stand-alone 13,000 BTU gas burner. It operates independently from the other four burners that heat the griddle. It cooks between about 300F to 450F. An ideal temperature range for air frying and convection cooking. 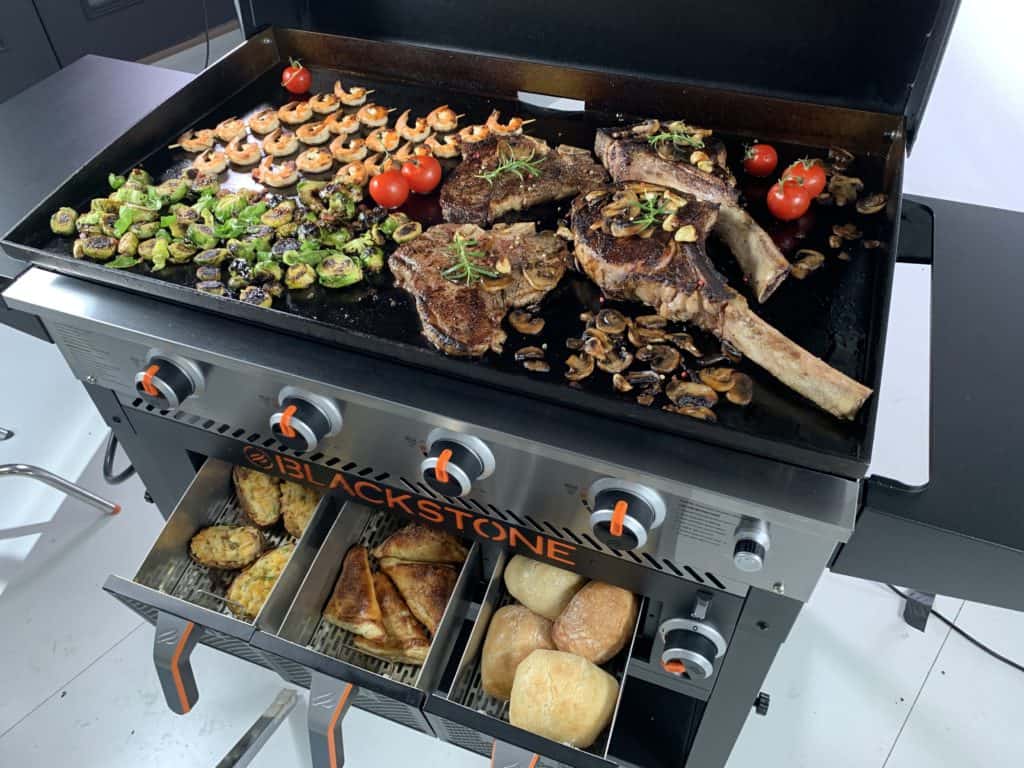 It took me a moment to realize just how brilliant the integration of the air fryer and the outdoor griddle really is.

Owning both an indoor air fryer and an outdoor griddle, I often use both at the same time, which can be very tricky.

The air fryer and the griddle complement each other really well. But for me, it seems like I constantly have to run between the kitchen and my patio. Inside, I peek at and stir the ingredients in my air fryer. Then out to the back deck where I am cooking on the griddle.

There’s a problem leaving one cooker unattended while checking on the other. Getting the timing choreographed between the two is hard to do.

But now, having the two appliances combined into a single unit will make getting the timing right much easier than before.

I already cook lots of yummy things with my indoor air fryer like cinnamon rolls, mini pizzas, and even shrimp and grits. The Blackstone AirFryer Griddle Combo warming drawer keeps foods warm until you are ready to serve.

Now, with the AirFryer Griddle combo, I can cook fun, previously unattainable dishes.

I like having freshly baked air fryer biscuits piping hot and ready for breakfast sandwiches.

Making mounds of melty nachos with meats and veggies cooked on the griddle. The cheeses will now be melted in the air fryer instead of under a dome. I’m already using my indoor air fryer and outdoor griddle multiple times each week. Now that Blackstone has married the two together, I'm using use two of my favorite cooking methods conveniently in one device.

Knowing Blackstone, there will be some fun and functional griddle accessories in the works to making this unit even more fun to cook with. UPDATE: Having owned this griddle for close to 6 months now I decided it was time to do an actual review of the Blackstone Air Fryer Griddle Combo. If you want to learn more about my opinions after cooking with it many times you can read the review here.

If you're excited to get the AirFryer Griddle combo fired up but not sure what to cook in it yet, why not check out this simple Blackstone air fryer recipe for fresh corn on the cob. A great way to enjoy sweet corn without heating up your kitchen!